The Planet Wilson released two acclaimed albums in the late 1980s. Their 1988 album ‘In the Best of All Possible Worlds’,  was released in a burst of low profile secrecy, and was nevertheless critically acclaimed across the board. In 1989 their second album ‘Not Drowning but Waving’ was released on their own Records of Achievement label featuring cut out picture sleeve (raised from the fiery depths by Demon O’Connor), and individually hand painted sticker.

Not Drowning but Waving

The Planet Wilson released three acclaimed vinyl singles in Taken for a Ride, White Lies and Fly by Night original releases 1988 and 1989 all featuring  both 7″ and 12″ extended mixes.

Taken for a Ride

SOUNDS SINGLE OF THE WEEK JANUARY 28TH 1989, THE PLANET WILSON ‘TAKEN FOR A RIDE’

“When that great lost band The Red Guitars called it a day, there was genuine sorrow that their unique sound had perished with them. The Planet Wilson, who include former Red Guitar Hallam Lewis (guitar) and Lou Howard (bass) have kept things low-key and interesting since their formation. But now, with ‘Taken for a Ride’, they have come up with something genuinely massive.

Describing themselves as ‘Psycho Aphrodelic’ (reminding everyone that Lewis was getting into African guitar long before Paul Simon hear the eureka bells a-calling from that continent) The Planet Wilson sound like no one else on earth. Though at times they recall Can, or even Shriekback, that’s usually for only five or ten seconds.

If you invest in the 12-inch of this you’ll get a ten minute mix of the title song, on which every Planet Wilson idea is mooted, starting off as crazy James Chance-meets-Holger-Czukay-solo-albums it lurches into bar-chord guitar boogie, intercepting the odd Afro distress signal along the way.

Lou’s bass playing is unbelievable – not just the tunes she invents, but actual sound of her fingers hitting the strings. Mike Watt of Firehose is probably the only person who could match this, Beats me why those assholes at Houston Central are peering up at Mars when they could be checking out The Planet Wilson.” David Cavanagh, Sounds Magazine 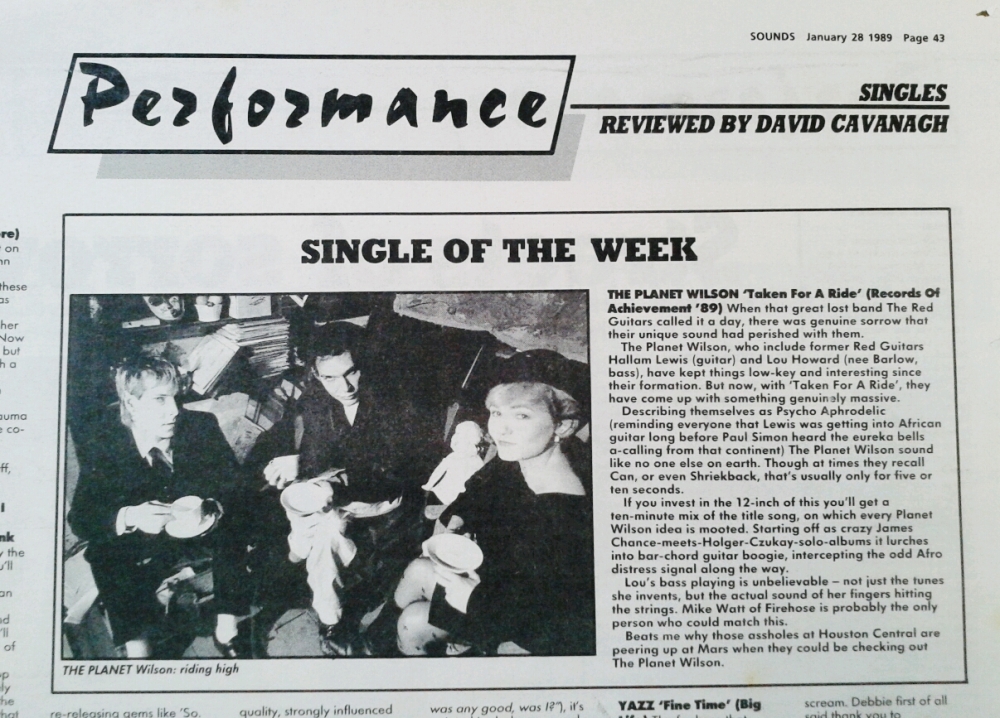 “Deserves to be enjoyed by a much bigger audience. Serious, demanding and danceable all at the same time.” The Independent

“A kind of Afro meets Devo cocktail. Truly original sound wise, The Planet Wilson had a few things to offer visually too – out of tis world! … Not a million light years away from the early spaced out Roxy Music.” Record Mirror

“Quickly becomes compelling, even if you try and resist it, as though it taps into some primal arterial route straight to the brain.” Hi Fi Review

“The Planet Wilson are worth taking time over …there’s back biting comment on modern society, misrepresentation and apartheid to name a few…anyone with a half open mind should take time out to listen to them.” What Hi Fi

Sound commercial potential without any of the usual crass drawbacks.” Underground Magazine